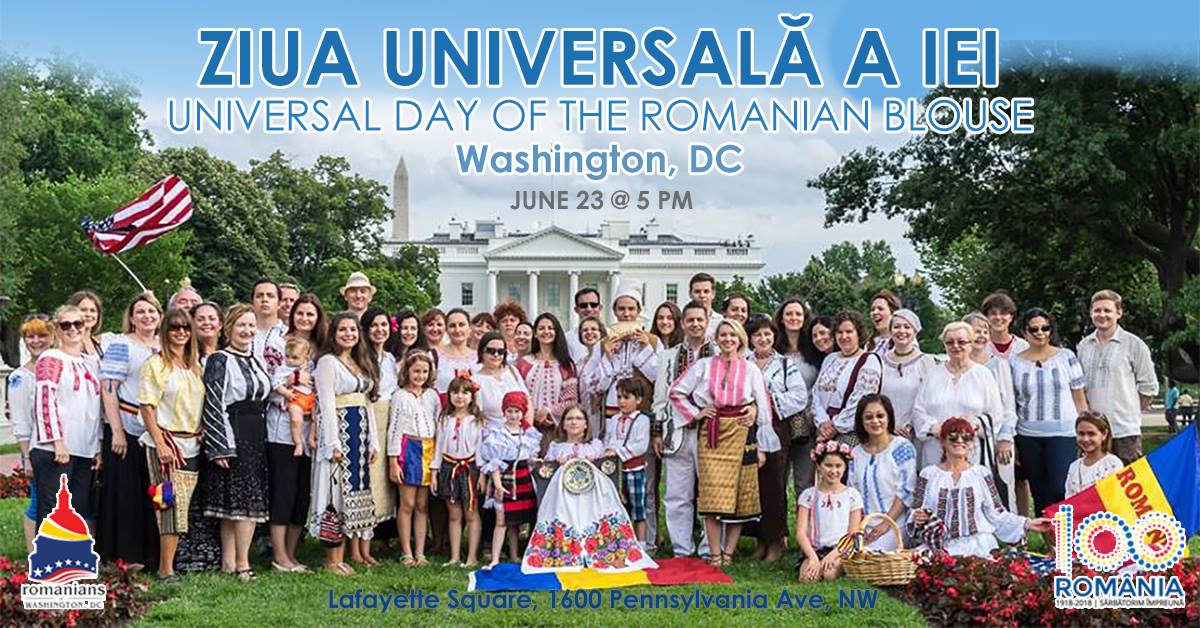 We will be joining again this year all those who celebrate around the world “The Universal Day of the Romanian Blouse” and we will mark the event here in Washington, DC on Saturday, June 23 at 5 pm in Lafayette Square in front of the White House. This is the same location where in 2015 we read the proclamation issued by the Mayor of Washington, DC recognizing June 24 as the Day of the Romanian Folk Costume in the Nation’s Capital and thus conferring its first official recognition.

I hope that in this most important year marking the 100 year anniversary of the modern Romanian state, the Romanian community in Washington, DC will answer this invitation and will come together to mark the event and to show its unity and the importance of our community. On that day, Romanians and those who love and appreciate Romania and its culture, are asked to wear a traditional Romanian blouse or shirt. The participants are also encouraged to bring Romanian flags and other folk items which could be used as the setting for the pictures taken at this event.

The Universal Day of the Romanian Blouse is a celebration of the traditional Romanian blouse (ia) uniting around the globe all those who cherish Romania and its folk costume. Coordinated by the online community La Blouse Roumaine, the day, first marked in 2013, has become a truly global event celebrated on six continents, in over 50 countries, 109 cities, and through over 200 events. The Universal Day of the Romanian Blouse has rekindled the interest and appreciation for the authentic Romanian folk art and creations, and for those who make them, and after more than 25 years since the fall of the communist regime, this movement has contributed decisively to the rebirth and a renewed interest in traditional Romanian culture.

So let us heed the call of “La Blouse Roumaine” and dress Washington, DC, and the globe, in the Romanian Blouse!