NYC: Radu Ioanid on Communist Romania and the Memory of the Holocaust – Alianta – Strengthening the Romanian American Alliance

NYC: Radu Ioanid on Communist Romania and the Memory of the Holocaust 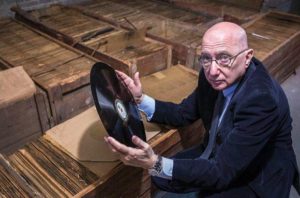 As part of the Romanian Cultural Institute in New York series of events dedicated to the Anniversary of 30 years since the fall of Communism in Romania, historian Radu Ioanid, the Director of the International Archival Program at the Holocaust Museum in Washington, D.C., revisits the policies of communist Romania towards the country’s responsibility in the Holocaust.

Radu Ioanid is Director of the International Archival Program at the Jack, Joseph and Morton Mandel Center for Advanced Holocaust Studies of the United States Holocaust Memorial Museum. He was Vice-President of the International Commission on the Holocaust in Romania, headed by Elie Wiesel, in 2003/2004. His book entitled “The Holocaust in Romania. The Destruction of Jews and Gypsies under the Antonescu Regime, 1940-1944” (2000) shows the stages of Romanian massacres of Jews. Further publications include “The Sword of the Archangel. Fascist Ideology in Romania” (1990) and “Le Pogrom de Jassy” (2015).