A book launch event for Professor Sanda Golopenția hosted by the Association of Romanians in New England (AR-NE) and attended by ALIANTA board member, Dan Dimancescu.

The author, retired as a Brown University faculty member, offered short readings from the book “Surveillance and Memory: Our Daily Lives” describing “reports written during 129 days in 1948, 1949, and 1950 by the secret police agents of the Securitate charged with the surveillance of the author’s father, sociologist [and statistician] Anton Golopenția, as well as all the transcriptions of the phone conversations in their house at that time. It also brings together some of Anton Golopenția’s declarations later on, while investigated as a detained witness, and personal memories.” He died in prison. 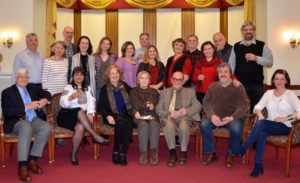 Center: Prof. Sanda Golopenția, to her right Lidia Bradley, translator of the book into English, to her left her husband anthropologist Constantin Eretescu. From the left Dan Dimancescu and Liliana Onita-Lenco, President of AR-NE.