One of the highlights of the Gala was the moment with Professor Norman Manea of Bard College received the Arts and Letters Award for his lifetime of literary contributions. The following is the transcript of both Ambassador Mark Gitenstein’s introductory comments, but also Professor Manea’s remarks, which told a story of one man’s fight against persecution and intolerance in Romania of the 1940s and a warning, perhaps, that our current state of extreme dialog and partisanship can easily lead us down a dark path if we don’t fight for our ideals.

We are a diaspora organization, so it is appropriate, indeed a privilege, to present this award to Professor Manea. It goes to the heart of why we assemble each year here in Washington.

Those of us who love this wonderful, but frustrating, country immediately identify with Professor Manea. My favorite of his books is his most famous, the Hooligan’s Return. It reminds me that the more I learn about Romania the less I know. Every trip I take to Romania – and I just returned last night on my 25th trip back since I ended my mandate in 2012 — on every trip, just like every page I read in this wonderful book,

I learn something and I realize how little I really know about Romania.

Whether it’s his focus on hooliganism, or Mircea Eliade, or Mihail Sebastian or Ion Petru Culianu, or the terrible details of Professor Manea’s exile to Transnistria, his flirtation with communism, his dissent in the middle 1980s leading to his flight to the US…in each of these episodes it’s easy to identify with his torment. He loves Romania or certainly its language and yet his anger and frustration is clearly palpable.

I’ve written only one book in my life and when you put your thoughts on paper you actually leave part of yourself on the page. As one mentor of mine once said to me about the words in our Constitution, cut these words and they bleed. It is hard not to feel that you are holding Norman Manea in your arms as you read this book.

I found the most wrenching part the fraught relationship Norman has not just with Romania and his mother tongue but especially with his mother herself. I have the same feeling about my mother and my home in Alabama. I think in one way or another we all have those conflicting feelings about our birthplace and our parents.

It can’t match the professor’s eloquence about my own roots or certainly about Romania. But I have had so many conversations over the last 10 years with many in this room and whether you know it or are willing to admit it you share this ambivalence.

One last thought. As the title makes clear this book is about “hooliganism.” To me hooliganism is speaking truth to power. In that sense I am a hooligan and proud of it. As I watched the media in Bucharest this week with the photo of a prominent Romanian politician making an obscene gesture at those in the EU who questioned Romania’s commitment to the rule of law I thought of all the times I either had someone make that gesture to me or realized they wanted to.

“Ambassador, who do you self-righteous Americans think you are?” I completely understood why many Romanians resented my hooliganism. But those of us in this room who question what Romania is doing do so out of our commitment to Romania, and our Alianta.

So as I close I ask each of us to think about why we come here each year and why we each return to this beguiling country as often as we can. It’s because we love Romania. So professor, thank you so much for forcing me and for those who read this book to understand why the most patriotic thing we can do as Americans and Romanians is to ask our country to become all it can be even if, on occasion, some in Bucharest want to give us the finger.

God bless Romania. God bless America and God Bless you professor for teaching us this. 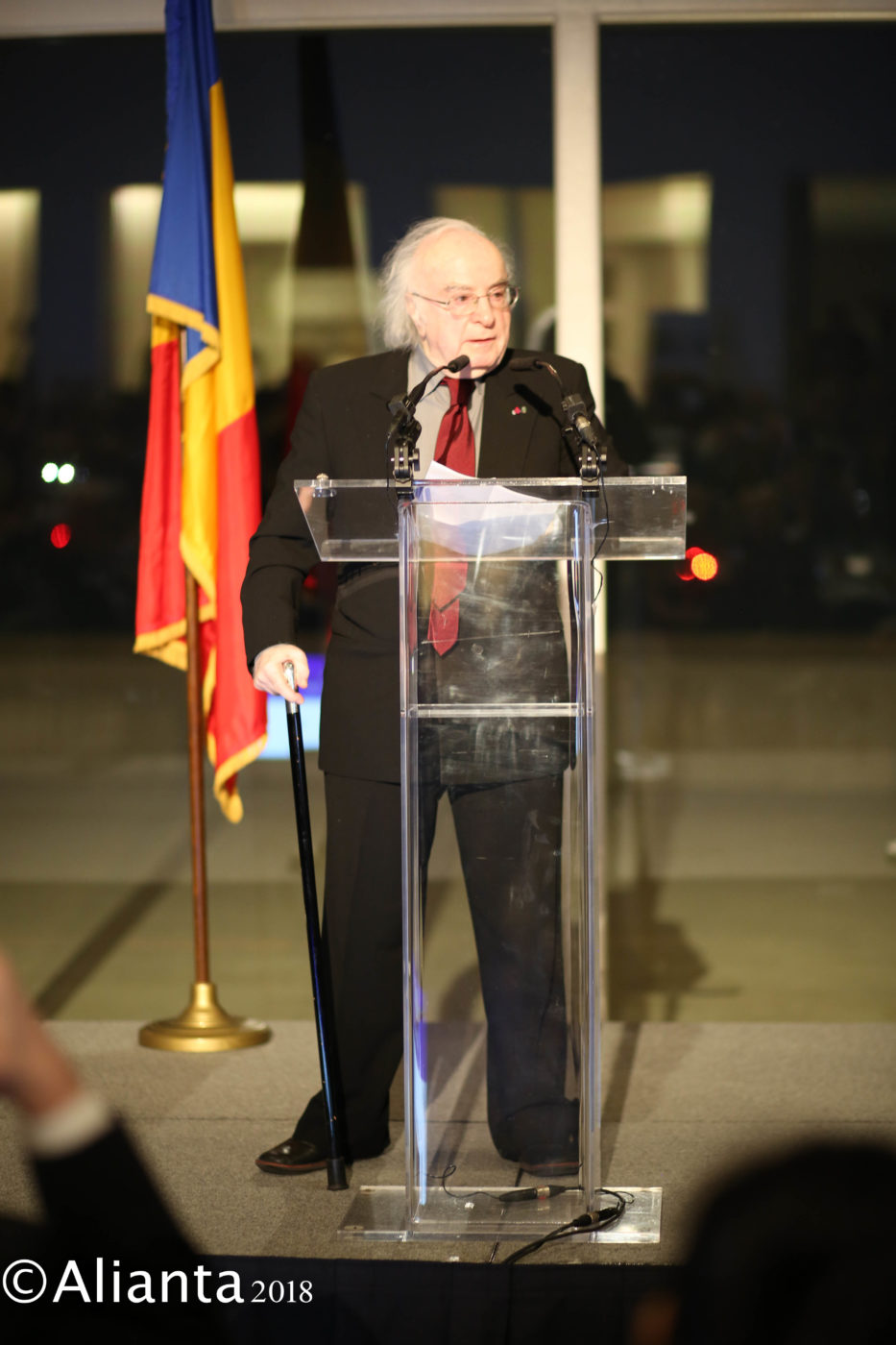 I thank you for this special event. I am honored by this important celebration, especially because it comes from both of my homelands, the native and the conquered one.

Romanians were waiting for a long time during the totalitarian oppression for the arrival of the refreshing American wind of freedom, for the essential ideal of democracy and human rights. We are here to celebrate this new time and new alliance.

ALIANTA is the best proof of the current relationship between our two countries.

It happens, unfortunately, in a period of disturbing political crises, in both our countries and in the entire world, with disturbing and dangerous signs of a populist nationalism and xenophobia, of an old-new anti-Semitism, of cynical demagogy and corruption.

We can only hope that the dark memory of the troubled past and the common sense will prevail, protecting our essential hopes for a secure future for all, for mutual understanding in an open society. The high principles of liberty, fraternity and solidarity are aggressed now by too many confusions, by cynical manipulations and the absolute power of money. It depends, in the very end, on each of us to re-establish trust in the spiritual resistance, in the individual and collective force of creativity, truth and beauty.

It seems to me the right moment and to evoke a Romanian hero of the dark years of the 1940s, a very troubled and bloody time of hatred and repression, when Romania was allied with the dark Nazi Germany, and its worst, criminal instincts.

I am referring to Traian Popovici, the distinguished mayor of Czernowitz (at that time the capital of Bukovina province, before it was occupied and became Soviet territory). He opposed the blind xenophobia of his government and succeeded, with great risks and courage to save thousands of Jews from deportation and death.

A man of great dignity and character in a hysterical time of obedience and mass killings. A singular, exemplary action of an individual faithful to his humanness and his unshakable believe in justice. In his memoir published after the war, he mentioned that his “strength and the will to oppose the politicians in power came from his families of priests that constitute his ancestry, from the education in his high school (Lycee) in Suceava, where he received the light of classical literature, and the values that differentiates man from the brutes.”

I must now also confess my personal reason for this not at all venturesome choice.

Traian Popovici was born in a village near my own birth place, he attended the same Lycee in Suceava and remains for me an unforgettable example of the luminous good side of my country.

It’s probably not by chance that he was praised and celebrated among the Righteous of Nations at The Yad Vashem Memorial in Jerusalem. Unfortunately, his homeland, his home town and his secondary school weren’t too eager to follow such a natural path.

I mentioned this heroic case, as a powerful and stimulating reminder for the now festive Romanian Centennial but also for our necessary common beliefs, Romanian and American and beyond, in a trustworthy future and its great, even if endangered potential. I felt the need to have the shining shadow of this almost forgotten hero as an honorary guest at our friendly gathering.