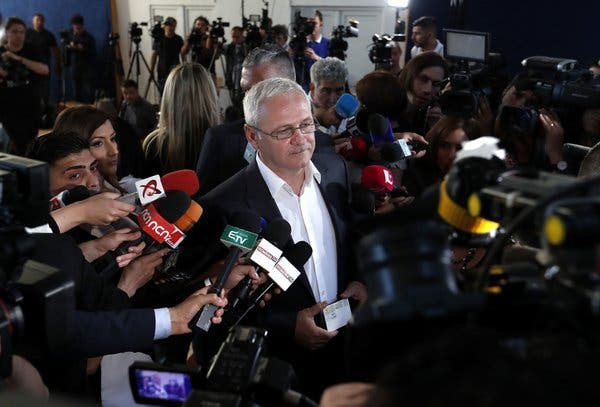 By Kit Gillet and Marc Santora May 27, 2019 BUCHAREST, Romania — Romania’s most powerful politician, Liviu Dragnea, was ordered on Monday to begin serving a three-and-a-half-year prison sentence for abuse of power, upending the political order in the East European country and handing a victory to those who view corruption as the chief threat to the health of the nation.

The ruling by the Romanian Supreme Court, which declined to revisit a sentence handed down by a lower court in June 2018, is not subject to appeal. It came one day after Mr. Dragnea’s party, the Social Democrats, were handed a stunning rebuke in elections for the European Parliament.

The Social Democrats received just 23 percent of the vote, down significantly from the 46 percent they received in the last national parliamentary elections, in December 2016. The two main opposition parties combined to secure about 50 percent of the vote.

At the same time, in a nonbinding referendum, an overwhelming majority of voters — more than 80 percent — expressed deep dissatisfaction with attempts by the governing party to change corruption-related laws via emergency decree, and potentially offering amnesty to officials convicted of abusing their power.

Taken together, it was a thorough rejection of the way the Social Democrats have governed since coming to power in 2016.

“This is the end of the Dragnea epoch,” said Dan Barna, the leader of the opposition Save Romania Union party. “From now on, we can go back to a normal political fight, debating about infrastructure, education, hospitals, about the way we support entrepreneurship, because in the last three years Romania was captured by only one topic: how Dragnea can avoid jail.

“This epoch is finished,” he added. “This dark period of Romanian history is left behind.”

Mr. Dragnea, emboldened by the failure of European Union officials to curb threats to the rule of law in Poland and Hungary, had sought to portray the corruption accusations against him as politically motivated. He frequently borrowed from the language that President Trump has used to attack those investigating his administration.

The Romanian leader has accused investigators of being part of a “deep state” engaged in a political “witch hunt.” At the same time, his party sought to make changes to the judicial system that critics said threatened to undermine the rule of law.

Still, when 12 embassies in Bucharest issued a joint statement last month urging the country to avoid its proposed judicial changes, the United States was among them.

The letter from the embassies followed reports that the government was considering two emergency decrees — one reducing the statute of limitations for certain offenses and the other allowing individuals convicted of graft since 2014 to retroactively challenge verdicts handed down by the Supreme Court.

“The emergency ordinances apparently under discussion have the potential to impact on the independence of Romania’s judiciary, which would undermine Romanians’ and partners’ trust in the justice system, and in Romania’s Government as well,” the joint statement warned.

Romania, which currently holds the rotating presidency of the European Union, has clashed with Brussels over rule of law issues since early 2017, when the government passed an emergency decree effectively decriminalizing low-level corruption.

This led to the largest street protests in Romania since the end of communist rule in 1989. The decree was withdrawn, but other changes have been successfully pushed through.

The European Commission has said that it will take action against Romania if it fails to address the concerns over judicial changes.

Romania’s government has also been criticized over its attacks on Laura Codruta Kovesi, the former head of the country’s anticorruption agency who is a leading candidate to run a new European public prosecutor’s office.

She was fired from her position in Romania, accused of damaging the country’s image abroad, among other charges. Then, in late March, criminal proceedings were started against Ms. Kovesi by an agency set up in 2018 with the task of investigating prosecutors and judges. Ms. Kovesi was barred from leaving the country, though the Supreme Court eventually lifted the ban.

In the past, Mr. Dragnea has been defiant in the face of legal defeats, including a two-year suspended sentence he was given in 2016 for electoral fraud.

That ruling barred him from becoming prime minister when his party won parliamentary elections later that year, but he has remained the nation’s chief power. Critics say he has been using that power to seek ways to avoid the consequences of the crimes for which he has been convicted.

Victor Ponta, a former Social Democrat prime minister who has become a vocal critic of Mr. Dragnea as the leader of a new political party, wrote on Facebook after the verdict that he was glad that the court decision came after the European Parliament election and the referendum had finished.

The results showed what Romanians think about Mr. Dragnea, Mr. Ponta said, calling him a man “blinded by pride.”

Before the verdict was released, Mr. Dragnea had displayed his typical bravado.

“I have thick skin, and this isn’t the first time I’m on trial,” he told reporters last week. “If the justices are unhindered, they’ll acquit me. If they don’t resist the pressure, God help us!”

The Supreme Court has now settled the matter, siding with a lower court in finding Mr. Dragnea guilty of intervening to keep two of his party’s employees on the public payroll between 2006 and 2013 even though they did no state work.

Kit Gillet reported from Bucharest, and Marc Santora from Warsaw.