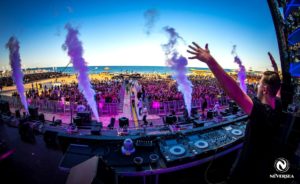 In the summer of 2018, Romania will host an amazing variety of festivals and concerts, and BR has prepared a guide that includes over 20 of the best events that you can attend, both in Bucharest and in other parts of the country.

Street Delivery – Smart Cities? – June 15-17 @ Arthur Verona Street – This year’s event questions technology’s ability to make us smarter, wiser, better. Citizens, companies and organisations are invited to present ways in which our cities can be improved and be friendlier to their inhabitants.

Rock the City: Nick Cave & The Bad Seeds and Arcade Fire concerts – June 19 -20 @ Romexpo – Australian musician Nick Cave and his group, The Bad Seeds, will perform for the first time in Bucharest. On the following day, Canadian group Arcade Fire will also deliver their first performance in the capital.

Massive Attack concert – July 24 @ Arenele Romane – Founded in Bristol 30 years ago, Massive Attack comes back to Bucharest after 10 years. They are among the pioneers of trip hop and incontestable innovators of electronic rituals.