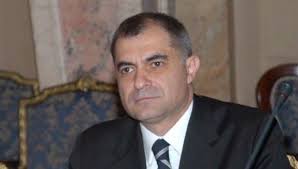 Mihnea Constaninescu chaired the International Holocaust Remembrance Alliance in 2016, contributing to the adoption of IHRA’s working definition of anti-Semitism.

The foreign ministry said Constantinescu, who advised Romanian prime ministers from 1990-2012, died Sunday in Nice, France after a long illness.

Constantinescu helped Romania prepare for joining NATO in 2004 and the European Union three years later. In 2001, he played a key role when Romania chaired the Organization for Security and Cooperation in Europe.

His last job was as a government energy security adviser.

There was no word about survivors. Funeral plans were not made public.

“He was a consummate diplomat, a Romanian patriot, and I know of no stronger advocate for the U.S.-Romania Strategic Partnership. Ambassador Constantinescu’s many contributions to both Romania and the international community, including his recent leadership of the International Holocaust Remembrance Alliance, will not be forgotten,” according to US Ambassador to Romania, Hans Klemm.